End the criminalization of solidarity to refugees NOW!

Report (14.1.16) from Chios, which characteristically shows how the situation has exacerbated during the last week:

·         The deployment of FRONTEX has begun without any information by the Greek govmt. towards the local politicians or the local population.

·          FRONTEX is now present everywhere. Patrols are executed in a permanent way at the spots where the refugee boats land. The FRONTEX policemen sit together with their Greek colleagues in the Greek police cars.

·         The coast guard – most likely by order of FRONTEX – doesn't allow anymore fisher boats rented by helping organisations, to leave the harbour and help refugees in the rubber boats to reach the coast.

·         The Greek police together with the FRONTEX cops ask for the ID cards of all helpers at the beaches on the pretext to prevent robbing of the refugees, plundering the boats or the stealing of the outboard engines.

·         Today (14.01.) some custom officers went to a small harbour to control the boxes with clothes etc. which are sent by citizens to the organizations and groups that provide the first aid to the arriving refugees.

·         The Spanish volunteer who took pictures of the Dutch FRONTEX boat in the harbour and was arrested, will probably be charged for "spying".

·         The two Swiss volunteers who where caught with some hashish were sentenced to 8 month prison on bail each.

·         It seems that the situation has worsened also on the Turkish coast. Patrol boats are all day long present on the straight between Turkey and Chios so that no refugee boat can pass. Even though the weather today (14.01.) was very good and the sea quiet no refugee boat come until late in the evening.

·        In progress are the pre-trial proceedings against three Spanish fire-fighters who decided to take leave from work to help refugees on the Aegean and two Danish. The Danes' NGO put a speedboat available for rescuing purposes where the 5 were aboard. They towed a refugee rubber boat to the Greek coast. Now they are accused of supporting the entry of "illegal migrants" which is a severe crime (felony) in Greece. (See the Diktyo's announcement below.) The prosecutor charges them because a Coast Guard boat was not far away and thus there was allegedly no need for immediate rescue.)

Yesterday (16.1.) they were brought before the investigating judge who – after almost 12 hours of their examination and the hearing of witnesses, between others also Syriza MPs – released them on bail of 5.000 € each and 10.000 € for the Dane who owns the boat.

·        Another boat with 17 refugees sank the night before yesterday in the Straight of Samos. Until now 6 people are found dead.

·        The Dodecanese prefecture decided to check every NGO acting on the Southern Aegean islands as well as all the doctors; they would have to provide proof that they are doctors and get a relevant certificate.

End the criminalization of solidarity to refugees NOW!

With the time passing we learn to expect everything from the "first time left" government of SYRIZA, but we stand shocked in front of the criminalization of solidarity to refugees, a policy which resembles increasingly the policy of its predecessors and the one of its European partners.

Last week started the implementation of the announced upgrading of the Frontex policemen, who now have the authority to control Greek and foreign citizens or members of social and political organizations that offer support to refugees, either by rescuing either on the proceedings of reception and solidarity (social kitchens, clothing distribution) with the arrival of the people on the islands. In Chios a solidarity Spaniard is on trial for espionage because of photographing a Frontex vessel. In Mytilini, solidarity NGO members from Denmark and Spain who towed a boat to the coast of Lesvos to rescue the people onboard are prosecuted on felony charges for help with entry of illegal foreigners.

The accusations are ostensible and without substance, and let's not fool ourselves: if there was organized, adequate, determined and effective state reception for the refugees and immigrants, there would not exist phenomena of abuse and exploitation from which, aside from the "safety" of frontiers, the new forms of policing and repression that so suddenly and immediately launched the Ministry of Immigration, are supposed to preserve us. The fact that the purgatory Petrou Ralli[i] operates in unacceptable conditions, the fact that under the government that calls itself left, work Detention Centers, Amygdalezas[ii] and Hot Spots[iii] and that solidarity people are prosecuted on the islands consists repressive and racist policy.

It is required[iv] from the Syriza government to manage the hot European issue of the closure and expansion of the borders to prevent in every possible way the flight of the populations from "there" from the terror and the misery of imperialist wars, of local dictatorships, fascist terrorism type ISIS and of the geostrategic game of the powerful. The fact that Greece was converted into a country under ironhard control and has lost its free will, forces the government to withdraw fundamental preelectoral positions also as regards the refugee issue and assigns to the country again the dirty work of dividing between refugees and migrants and the deportation of a large number of the shelter seekers. In its turn Greece is trying to push the pressure of interception to Turkey.

End immediately the persecution of the solidarity people

Frontex out of Greece

Down with the Evros fence[v]

Political asylum for those with grounds for asylum

Legalization of the immigrants

HANDS OFF THE SOLIDARITY PEOPLE

Network for the Social Support to Refugees and Migrants

Network for the Political and Social Rights

[i] The migrant detention center of the Athens police

[ii] Amygdaleza is the biggest Greek detention center, about 20 km north of the Athens city center

[iii] the new Screening Centers (until now in Lampedusa/Italy and on 3 Greek islands (planned are totally 5), where in accelerated proceedings is decided whether the refugee will be granted asylum or a right to remain temporarily in Europe whether he will be deported

[v] The fence at the land border between Turkey and Greece, which prevents refugees to cross the border on land 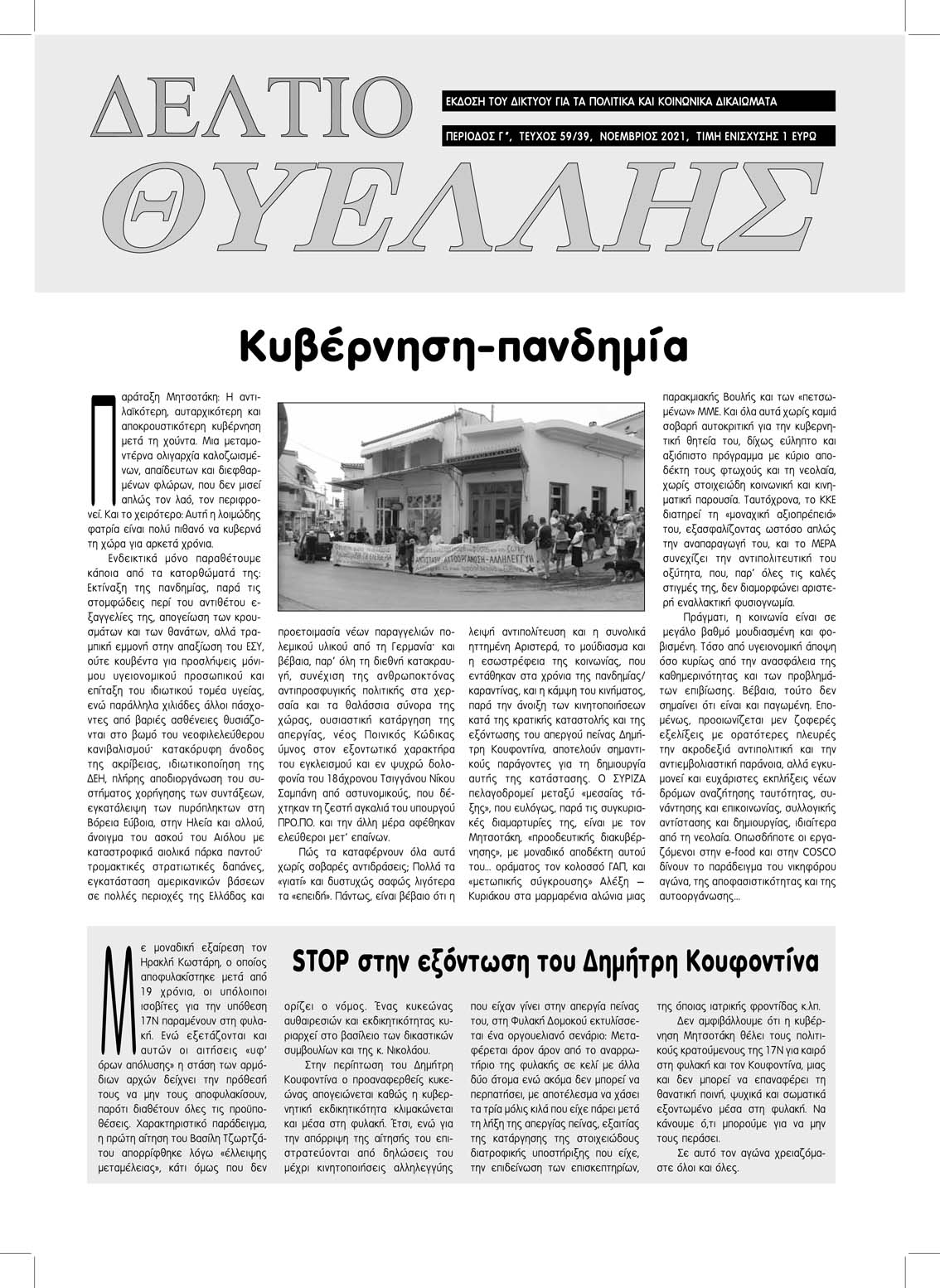